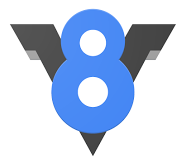 In V8 release 4.9 we shipped more JavaScript ES2015 features than in any other previous release, bringing us to 91% completion as measured by the Kangax compatibility table (as of January 26). V8 now supports destructuring, default parameters, Proxy objects, and the Reflect API.

Release 4.9 also makes block level constructs such as class and let available outside of strict mode and adds support for the sticky flag on regular expressions and customizable Object.prototype.toString output.

Read more from the source: v8project.blogspot.com

io.js v3 is essentially a beta release of Node.js v4 with significant updates including many ES6 features

Compatible with npm, io.js was spawned as a fork of Node.js late last year after disagreements arose over Node’s direction. Everything was smoothed over this spring, and the two factions, which had many of the same participants, agreed to reunite. “The governance of io.js and Node.js have already converged, all that is left is the technical side, and io.js v3 is a significant step towards completing it,” said Mikeal Rogers, who has served as a spokesman for io.js, in an email.

“Developers need to know about io.js v3 because it’s a significant change to the native side of the platform they’ll need to understand in order to prepare for Node.js v4,” Rogers said. He also noted version 3.0.0’s status as the likely last release line for the platform.

You may have heard of the wonderful site, WebpageTest, when researching ways to improve your site performance. One of the most useful features (in my opinion) is the Filmstrip; it shows you incremental screenshots of the browser rendering your site, so you can see how quickly users are able to start consuming content. As of the past couple of months, you can enable similar functionality in Chrome!

Read more from the source: damonbauer.me

Restrictions include no sparse arrays, ES6 class instances are sealed, and a few minor restrictions that have not yet been finalized.

Google is currently working on SoundScript, a way to speed up object-oriented programming in JavaScript. The content of this blog post is completely based on a recent talk by Dmitry Lomov. That is, everything I have written here is inferred from those slides and may or may not be correct.

Read more from the source: 2ality.com

Visually debugging CSS animation just got a whole lot easier! We’ve needed better debugging tools (or any debugging tools, really) for CSS animation for ages. Now we’re starting to see some show up in browsers! The latest version of Canary now has controls to globally slow down and pause animation right from Dev Tools. It’s such a huge help for both designing and troubleshooting your animations.

To try these out for yourself in Canary, open up Dev Tools and go to Styles tab under Elements. Look for the play button in the far right and you’re off to the races.

Read more from the source: valhead.com

Use this online test to check your server then use Firefox and set security.tls.version.min to 1

Poodlebleed is a vulnerability in the design of SSL version 3.0. Poodle is actually an acronym for Padding Oracle On Downgraded Legacy Encryption. The vulnerability allows the decryption to plaintext of secure connections. The bug was discovered by Google Security Team researcher Bodo Möller in collaboration with Thai Duong and Krzysztof Kotowicz.